Hello denim friends, In this article, we will discuss the potential use of cryptocurrencies, especially the concept of Smart Contracts and Decentralized Finance or DeFi. This article can answer as well as be a reference for those who are really looking for what is the use of crypto? 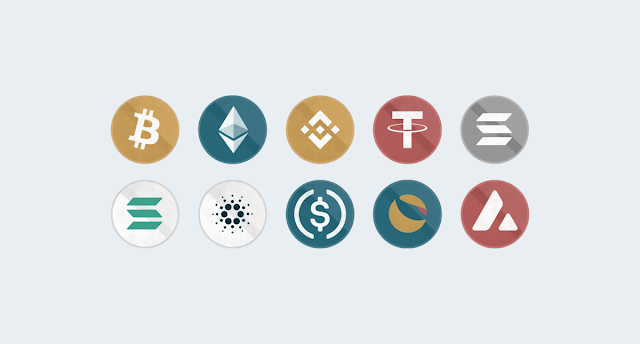 Did you know that in 2020, cryptocurrencies experienced a tremendous increase, for example bitcoin. bitcoin increased by 450% throughout 2020, Ethereum rose more than 1000%, in the last 1 year there was also yearn finance, which had reached a record of up to 650 million from what was previously only around 10 million, the increase was up to 6400 percent in just 3 amazing months.

but have you ever thought what is the use of cryptocurrencies?
Is cryptocurrency just a commodity of digital coins and tokens that are used as objects of trade?
price movements are aggressive but have no functional value at all. Can crypto really have real usable value in the future?
So, what are the factors that make crypto prices soar? Is it just market speculation?

Well, broadly speaking, the increase in cryptocurrency prices can be triggered by 3 things:
Due to market speculation :

We can’t deny that one of crypto’s aggressive rises is fueled by market speculation or market optimism that may be excessive, but where does this optimism come from? of course from its potential functional value and usefulness.

With the development of these technologies and adaptations, the potential use of crypto is real and of course widespread in the future, so that it becomes more real and this can increase the value of the crypto economy, this second point will be discussed in depth in this article.

For example bitcoin, you already know that the supply of bitcoin is limited, you can’t increase the supply, but it can be reduced due to negligence with the marketcap value of bitcoin which has reached 9500 trillion. You could say cryptocurrencies are the rarest and most liquid in the world today.
Those are the three factors that make crypto prices continue to rise.

In this article we want to discuss point 2 more specifically,
What kind of technology does crypto offer the world?
Simply put, crypto technology can liberate all digital forms in the world without having to be controlled or controlled by a company, institution, or even a country.
Usually a digital is made by a company that offers services to programmers, the service can still be enjoyed by users because it is managed by the company, the company provides fees to users and the company pays for server maintenance to service providers such as amazon or alibaba. so they can still live.
So what if these programmers can create digital services that can be enjoyed directly by users without having to be managed by the company and no need to use a single server.
Crypto technology with the name blockchain can create a network of servers spread throughout the world and operated by a home computer network, so that every program created on the blockchain network can run without the need to be handled or controlled by a particular company or institution.
What kind of programs can be created in a blockchain system?
Actually it can be anything, for example financial services such as savings and loan services, insurance, disbursement of inheritance, buying and selling assets, etc.
But all these services are available with traditional mechanisms such as banking, securities, etc.?
It is true that these services are widely available but for crypto activists, traditional financial services have many drawbacks. especially regarding the limitations of the human role, with crypto technology the human role in implementing this service can be replaced by computer programs that are completely free from human interests. This technology is commonly known as Smart Contracts.
for example financial services made with crypto technology, can facilitate the transfer process to anyone in the world, can be very fast and cost very cheap, why is that?
because there is no role manual for humans and no bank administration fees to be paid, very sophisticated. 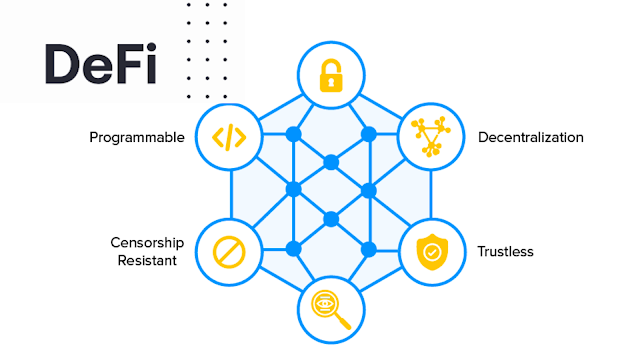 This cryptocurrency-based financial service program is often referred to as Decentralized Finance or DeFi. Financial services with this DeFi concept are open, global, and neutral. This program knows no geographical boundaries, does not care about political conflicts between countries and does not consider social status. rich or poor, even important officials, whoever they are, and whatever their background, everyone can access it with the same protocol, nothing special, only internet connection, everyone can access this financial service.
Not only that financial services with blockchain technology can be said to be safe from human beings who have bad intentions, why is that?
because the operational services can run automatically and no human can tamper with the system that has been launched on the blockchain, financial services are transparent from an operational point of view, but at the same time private from a private side, meaning that anyone can verify the operational process of the service protocol. THIS executes orders, not gimmicks
The cool thing is that users don’t need to be asked for identity so you don’t need to give your ID card or cellphone number which is often misused by the company to be sold to 3rd parties and ultimately makes you often subject to fraudulent SMS spam, unclear advertisements, credit card offers, illegal loan offers or OTP scams.
really cool, the potential utility of crypto technology?!.
Indeed, the potential is extraordinary, but unfortunately, it is rare for people to know and actually look for detailed information, nowadays most people only talk about fluctuations in the price of crypto assets, which are rising aggressively, especially bitcoin and ethereum, but most of them don’t really understand what the functional value is. cryptocurrency assets in the future, whereas with the variety of crypto projects going on and this ever-widening process of customization it may be that one day there may be many blockchain-based digital service programs that are widely used by people all over the world, perhaps for saving in blockchain, transferring money with blockchain, claiming health insurance with smart contracts, investing and trading in securities whose servers are on the blockchain, executing all civil trade laws with smart contracts, even borrowing business capital with certain guarantees can also be executed using smart contract services on the blockchain, all The operational process can be automated without any human error, fast, cheap, safe, protocol neutral, also transparent, but now your privacy can be maintained.
How do bitcoin, ethereum, and other cryptocurrencies relate to blockchain technology, smart contracts, DeFi and more?
An interesting question is that the key to implementing this technology is not bitcoin but ethereum and DeFi tokens that were born from programs made on blockchain, ethereum such as chainlink, uniswap, compound, synthetic, and others.
What does it mean?
So here’s the concept, currently many programmers around the world are competing to make financial service programs in the form of DeFi they make this service not on servers made by companies like Amazon or Alibaba and others, but using blockchain, ethereum as a base server, blockchain and ethereum can continue to be active as a server, because there are tens of thousands of miners around the world who use their home computers to mine ethereum as well as as a server path for data transfer programs that have been created, the programmers who create the service will need ethereum to publish their programs on the ethereum blockchain , because in order to publish their program, they have to pay the miners in Ethereum as well as the users who will later use the service. if programmers want to run the program they have to pay or the term gas fee in the form of ethereum, that’s what makes the economic value of Ethereum.
Ethereum or commonly known as ETH is needed to implement smart contracts to build service programs for programmers, as well as issue tokens which are distributed to users.
What do these tokens do?
Most of these tokens serve as voting tools that determine the direction of development of this financial service feature, so it is very similar to shares if companies usually issue shares, now if these crypto programmers issue tokens as voting tools,
In each decision-making process, of course, the more decentralized, generally the developers of this program will distribute 80-90% of their tokens to users, the developers themselves hold 10-20% of tokens, as their voting rights more broadly. function of this program, it is expected that the token price will increase. and developers can profit from rising token prices.
Maybe now you are getting curious about what smart contract programs are currently actively developing?
actually there are so many but mimin will mention only a few that are well known. the first is Chainlink, 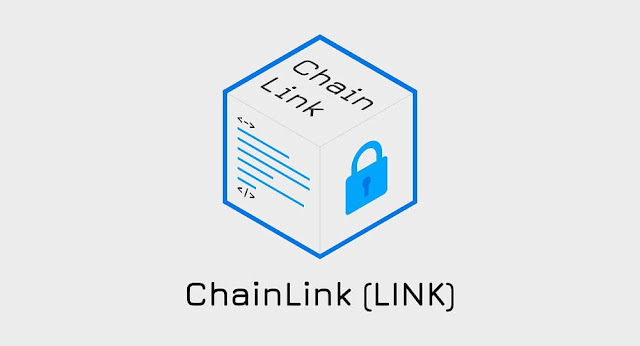 Chainlink functions as a decentralized repository of data such as economic data, political data, demographics, etc. The data contained in Chainlink can be the basis for most smart contract services where for every payment data retrieval using the Link token, apart from Chainlink, there are also competitors. , namely the band protocol, there is also Uniswap which functions as a more stable money changer, how can it be stable?
yes because the name is also not a price, not a bid and over order book, but from an algorithm that calculates the ratio of the volume of crypto token assets, which is on binance is called CAKE, these two tokens if on the Indonesian exchange can be bought at Tokocrypto, especially CAKE which operates on Binance SmartChain only exists in Tokocrypto, then there is also a compound that functions as a loan storage medium, so borrowers can store their crypto assets as collateral and borrow assets in stable form such as USD tokens later, the borrower will get a fairly large interest, it varies according to algorithm of the smart contract itself.
Wow, it turns out that there are also many potential uses and functions of cryptocurrency technology in the future?!
yes! Indeed, there are many, apart from what I mentioned earlier, there is also Syntetic which has the potential to trade various derivative assets, there are also financial pancakes, swaps with Binance, etc.
So who says crypto will have no uses and functions other than as an object of commerce? According to Mimin himself, the potential is huge, but we really have to be careful in monitoring which projects can develop well so that token prices can continue to rise, such as bitcoin and ethereum.
For those of you who believe by adapting crypto technology in the future, you can invest in tokens and coins that have a mission and purpose, so that they can have real uses in the future, all the digital assets that I mentioned earlier you can buy. on the exchange of your choice. , but for you, we advise you to buy this asset on Binance, why ?
Yes, after a review, several exchanges in the world, you could say Binance is an exchange that has many advantages, such as good security, and complete features, especially for DeFi tokens issued by Binance Smart Chain are only available exclusively. on Binance.
That’s all we share this time, hopefully it can be useful and add to your insight, especially about the world of crypto and blockchain technology. For those of you who have questions or want to share about your experiences related to the world of cryptocurrency, don’t forget to write them in the comments column.